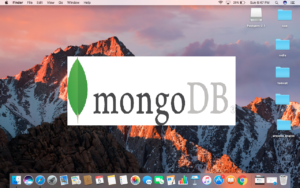 In this post we will see How to install MongoDB on Mac OS X. MongoDB is one of the most used, open-source document database, and NoSQL database. MongoDB is developed by 10gen.

Visit MongoDB official website and download the .tgz file from the community section of the website.
Now extract the downloded .tgz and mv the mongo directory to /usr/local/mongodb directory using following command in terminal.

MongoDB stores the data into the /data/db directory by default, so we need to create this directory and also assign proper permission using chown command.
Open the terminal run the following command

Now we need to set the envirent variable for MongoDb, So the mongo and mongod command can be recognized from the terminal.
For that we need to add the mongodb/bin path to the ~/.bash_profile file.

Now .bash_profile file will open in a text editor. In this file add the following exports

In order to work with mongodb we need to first run the mongod command which starts the mongo daemon .
So open two different terminals.
Now in

Video : How to install MongoDB on Mac OS X