As described the REST is architectural style of the web, but what does that even mean??
REST is a set of design criteria and not the physical structure or architecture of the system. REST is not tied to the ‘Web’ i.e. doesn’t depend on the mechanics of HTTP ‘Web’ applications are the most prevalent. hence RESTful architectures run off of it.

In a REST based architecture everything is a resource. Rest Resource is data on which we want to perform operation(s). So this data can be present in database as record(s) of table(s) or in any other form.This record has unique identifier with which it can be identified like id for Employee. A resource is accessed via a common interface based on the HTTP standard methods. 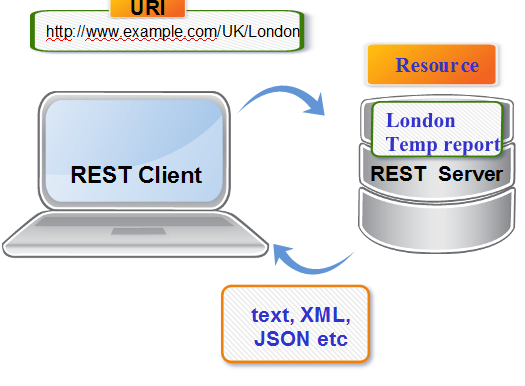 In a REST based architecture you have a REST server which provides access to the resources. A REST client can access and modify the REST resources. Every resource should support the HTTP common operations. Resources are identified by global IDs (which are typically URIs). URI is an ‘address’ of a resource. A resource must have at least one URI. No URI is Not a resource (i.e. it’s really not on the web, so to speak ). URIs should be descriptive (human parseable) and have structure. For Example:

there are 2 less commonly used methods: